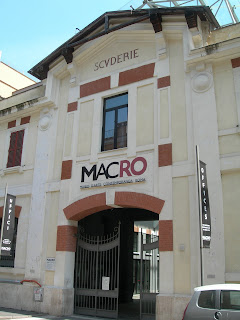 After last week’s rant on museum architecture, triggered by two newly built Rome contemporary art galleries, I’m dedicating this comparatively uncritical post to a flaky discussion of some of the works I enjoyed at the contemporary art gallery, Macro.  My original intention was to also discuss the work at MAXXI, the Galleria D’Arte Moderna and the Museo Bilotti, but I need to give my brain a brief reprieve before I start blogging about the Venice Biennale next week. I briefly discuss MAXXI’s architecture in the previous post, which will have to satisfy.

Why Macro?  Because unlike MAXXI, the gallery let me take photos of the art, which makes my life easier (It was made from plaster.  It looked like a lobster. But it was green. It was the same size as a lobster. But perhaps one of the ones that grows off the coast of Tasmania. Oh, I’ve run out of space for anything other than description…).  I can feel a rant on photography in galleries about to spill over, so I might just move on to the art….
As I noted in my previous post, Macro’s been built around a couple of ex-factories: the Peroni brewery and a slaughterhouse, and I’m going to confess now that it was my interest in museum architecture that triggered the pilgrimage to Macro, rather than the art.  I had it in my head for some reason, that Macro was going to be fairly small, but I almost missed my train out of Rome trying to cover it all.  It’s like a maze, a very spread-out maze, which gave the paradoxical impression of being a very empty gallery. 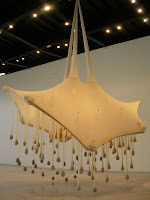 The first works visitors encounter are Ernesto Neto’s large ear splittingly loud silver cube, and one of his ubiquitous hanging spice-in-stockings work.  The large space in which Neto’s work is installed is (I’m assuming) Macro’s ‘showcase’ area.  For some bizarre reason, whenever I visit an overseas gallery I encounter one of his works.  I enjoy his clove and cardamom-smelling installations, so perhaps the universe lures me to book tickets to certain locations based on this enthusiasm.  While the scale of Macro’s key exhibition space forces a certain amount of humility in the viewer, it was nothing compared to my experience of his 2006 installation Leviathan Thot in Paris’ epic Panthéon.  Neto’s white bulging organic shapes contrasted in the most bizarre way with the building’s strict symmetry, rich colours and indulgent ornamentation.  The otherwise frosty space was filled with the warm smell of spices contained within Neto’s large bulbous stockings.  In 2006, I’d just finished my undergrad degree in fine arts, and I think this installation was a catalyst for the subject of my PhD: site-specific art.  Basically, what I’m trying to say is Neto’s work at Macro was brill, but I’ve been spoilt by my Paris experience.
Ridiculously, the other work in Macro’s large space, The Crisis is (Not) Over.  Drawings and Dioramas, was by Dan Perjovschi - another artist who seems to ‘follow me’ OS.  I find his drawings amusing and topical, but I was a little disappointed that the work of a ‘new’ artist wasn’t in that monumental space. 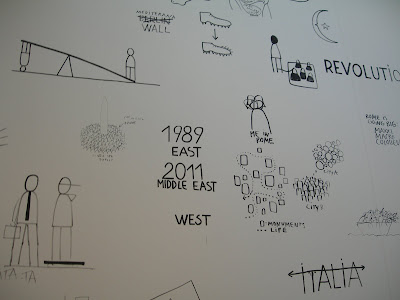 I noticed the rough curved concrete supports on the next floor before any of the art.  I was sooooo hoping by that stage that there’d be some sort of didactic text telling me whether they’d bottled beer or slaughtered cattle in the space, but no.  Art was dotted throughout the respectfully white-painted space, such as Perino and Vele’s Closed for This Week (2002), hung between two pillars, and Mario Ceroli’s Goldfinger (Miss) (1965).  I enjoyed the former because it was something that pretended to be another thing, and Ceroli’s work because the ‘back’ of his sculpture still showed the pencil and raw saw-marks of its production.  I think I’ve mentioned my obsession with ‘things that pretend to be other things’ a few times in this blog.  Being in Italy, I probably don’t need to tell you that I’m in trompe l’oeil heaven right now.
The Antony Gormley exhibition didn’t interest me very much, nor the sculptures of Sarah Braman, in fact, the room that interested me the most was what you could call a documentary art space, recording the activities of Rome’s alternative art space Galleria L’Attico in the 1960s and 70s. The gallery encouraged cross-disciplinary art, and as I learned from the archived photographs and exhibition posters, it hosted exhibitions by now well-known artists, such as Jannis Kounellis, Joseph Beuys and Robert Smithson.  The posters of Kounellis’ horses particularly caught my attention because Hobart’s MONA has a slightly less high-maintenance work of his that consists of a chair, bowl with knife, and two live goldfish.  If the staff at MONA thought the fish were hard enough, imagine how demanding the horses would be.
A couple of artworks played with the gallery’s architectural features: Daniel Buren’s site specific Dance between triangles and lozenges for three colours (2010) and the art in the two lift-wells, which could only be viewed in full by riding the elevator.  I’m a bit of a Luddite when it comes to video, so you’ll just have to believe me when I write that it’s worth taking the lift.
Stay tuned for Venice Biennale posts…
at 10:01 PM