A few years ago, the British artist Lindsay Seers and Queenstown-based Raymond Arnold visited the reclusive Leo Albert Kelly in his Queenstown home, videoing the tour of his extraordinary self-built corrugated iron house, complete with circular chapel and observatory. During their visit, Kelly revealed a great number of paintings and his collection of found objects - the full extent of which was only discovered on his death shortly after. 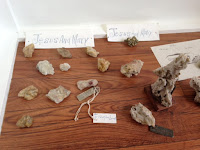 The resulting video was shown as part of Seers’ installation, Suffering, at The Unconformity festival last month alongside Kelly’s many paintings and collections of memorabilia, rocks and other ephemera. It was exhibited in the Queenstown’s Uniting Church building and Country Women’s Association hall. While the once devoutly Catholic Kelly would have probably rolled in his grave at the thought, the hall provided the perfect architectural environment for Seers’ replica iron house and video, which looked like it was shoehorned into the main hall. Kelly’s paintings also suited this humble environment perfectly, hung against the roughly hewn, white-painted wooden interior of the rear hall and kitchenette. Seers’ creative edit of the video (which included interviews with local residents, images of the landscape, and even the building that burnt down next to the CWA only three weeks before the opening) was interesting, but it left me wanting more information on Kelly’s life and work.

Kelly left the church when Catholicism “didn’t match his opinions” (such as the rapture that’s supposedly due to occur in 2018), and he had a falling out with a local priest. His rumoured plans to join the priesthood fell through following a mental breakdown, and it’s assumed he had psychological issues and autism. He was described as ‘very reverent, very humble, and very quiet and private’, and at one point he worked as the town’s postman. While the exterior of his house indicated an eccentric individualism, there was little known about his creative pursuits until just recently.

Kelly’s paintings are a mix of mystic Catholicism, religious figures, and Queenstown landscapes – both built and natural. They feature rainbows, planets, angels, the Virgin Mary, and magic purple landscapes with glittering temples. But many of them also include the relatively banal streets, cars and houses that made up his everyday physical environment.

The paintings are individually numbered and hand-framed with offcuts from doorframes and other scrap wood. Number 36 is painted on Masonite with handwritten notes roughly screwed to the top. It portrays a group of people and their cars at the edge of a lookout, seemingly oblivious to the looming storm. The sky is ominously split in two, with the clear blue sky (with an oddly bright moon) on the right threatened by stormy grey clouds on the left (albeit with an accompanying rainbow). Number 35 depicts a central angel wielding a bloody sword, with a line of angels descending from the sky behind her - the mystical scene countered by the Queenstown townscape in the foreground. The recognisable grid of streets, complete with central roundabout, traffic and houses, are painted in flattened, map-like style. The paper tags attached to the frame echo this conflict between the everyday and the mystical: a couple of notes read “The Holy Trinity. The father. The Son. The holy Sprit” and “They will seek God’s face In there (sic) misery”, while another identifies the subject of the painting as “The Greate (sic) Red Cut Back”.

Number 29 is a little more grounded, but again, mixes Catholic iconography with a depiction of Kelly’s everyday surroundings. A walled house and garden sits in the foreground of an expansive natural landscape, its isolation exaggerated by the contrast between the flattened grid of the domestic plot and the illusion of depth in the surrounding landscape. An angel (or Jesus?) tends to a small bush, while a nun (or is it Mary?) works in the garden. Another painting (no.4) is captioned “Inviting Leo to look into Her stone”, recalling the time he was “given a gift” of a rock in the shape of the Virgin Mary while wandering along a beach. The rock, which is framed in a glass and wooden pod with doorstoppers as supports, does indeed look like the Virgin Mary. 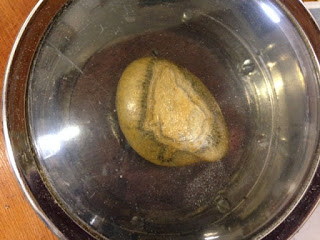 No one seems to know what is going to happen to this incredible body of work, and a few locals I spoke to worried it would just go back into the church’s basement. I’d love to see it acquired by our state museum. Kelly’s work was never intended for exhibition or public display. They were created for himself and for his God, which is why they’re so intriguingly personal and revealing. It would be a great shame if his work wasn't preserved for the future. 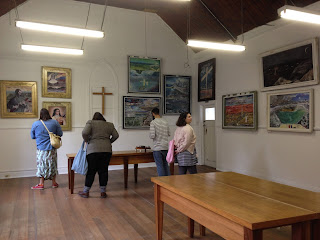 Lindsay Seers' Suffering was part of The Unconformity Festival in Queenstown, Tasmania, 14-16 November, 2016.  See my previous post for an interview with the festival director, Travis Tiddy.

For a more extensive review of The Unconformity, see my article 'Festival for a town that doesn't conform' in Realtime 135, 2016.

This review was originally published in the November edition of Warp Magazine.
at 5:30 PM