The 2010 Biennale of Sydney: precarious beauty

It’s upon us again: [drum roll…] “The 17th Biennale of Sydney: The Beauty of Distance, Songs of Survival in a Precarious Age.”  Does it promise to be bigger and better?  No, thank goodness.  However, the Biennale PR team are out with their twitter feeds, Facebook fan pages and other social media platforms still drumming up the hype; and the theme is definitely dramatic enough (‘survival in a precarious age.’).

To be honest, I love large exhibitions.  Until last year, when I was lucky enough to be given a grant to visit the Venice Biennale, I’d really only been to the relatively largish Australian Perspecta (which is unfortunately not running anymore), Asia Pacific Triennial and the Sydney Biennale; however I’ve always been aware of the special art exhibiting conditions created by these major projects.  It’s become obvious to me over the last couple of years, researching site-specific art in Australia’s Public Museums, that the availability of unusual sites even within regular exhibiting spaces (and subsequent funding and media coverage of the included works) is in fact widened during these events.  By ‘unusual sites’, I don’t just mean the highly spruiked Cockatoo Island – I’m also thinking of interventions into the Art Gallery of New South Wales’ entrance vestibule, for instance.  There was no vestibule-responsive work in this year’s Biennale, however, Cockatoo Island was well-populated with both site-specific and site-oblivious works, as well as a few special Biennale sites: Pier 2/3, the Botanic Gardens and the Opera House. 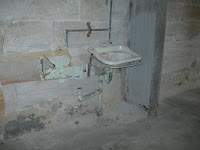 I was lucky enough to be invited to the vernissage (maybe it’s just the Aussie cultural cringe, but I wonder why they can’t just call it a preview?), and took advantage of the low crowds to ferry across to Cockatoo Island.  After the last Biennale

[link to 2008 Biennale Catalogue on Amazon], I was eager to see the extent of the site-responsive work.  Two years ago, I wrote on this blog about the way in which the Biennale catalogue boasted of the 'over thirty' site-specific artworks, yet in reality only about seven works had a meaningful relationship with the site. 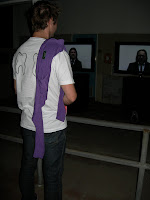 Again, I was disappointed.  I don’t understand how artists can be given such amazing spaces and then rather than make work in dialogue with the site, they make work that competes with the surrounding space, making the rusted sinks, archaic machinery, painted symbols, drawers, signs and cranes look decidedly more interesting in comparison.  A few works, such as the Mieskuoro Huutajat (Shouting Men’s Choir) video installation were subtly onto it (see left).  Roger Ballen’s eerie photographs also sat well within the crumbling building on the top of the island.  As a testament to the strength of a few of the works from the last Biennale, the spectre of Mike Parr’s installation MIRROR/ARSE still lingered as we passed the (this year unused) ex-Navy building, as did TV Moore’s work in the Dogleg Tunnel. 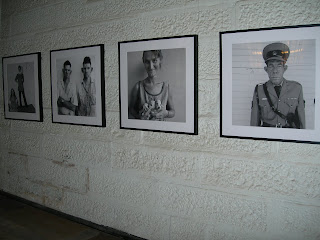 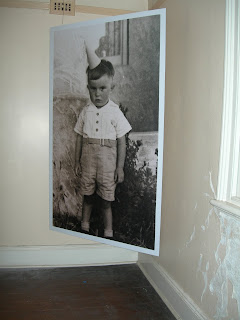 Part of Aleks Danko's SOME CULTURAL MEDITATIONS, Cockatoo Island
Also on Cockatoo Island, was one of my favourite works from last year’s Venice Biennale, The Feast of Trimalchio by the Russian collective AES+F.  The massive work in projected onto three large screens which surround the viewer.  To a dramatic soundtrack, scenes of the ultimate holiday resort (a small tropical island with a ski resort at its peak), where guests are overly pampered to a creepy degree and stereotypes are threatened. 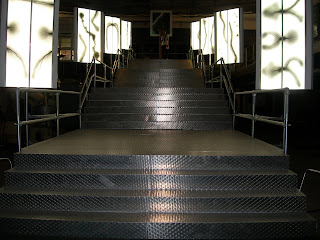 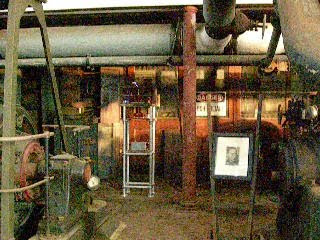 We had a bit of a regressive bounce on the jumping castle, an artwork by Brook Andrew.  It was only later, when I read the artist statement for Jumping Castle War Memorial in the free booklet, that I realised that the meaning of the work was far removed from what I’d imagined jumping up and down on the pattered blow-up. 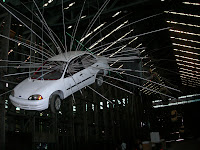 Cai Guo Qiang’s Inopportune: Stage One, which seems to be the showcase work for this year’s Biennale, wasn’t working (left).  Disappointed, I went next door and took a photo of the performance art next door, but they told me to go away.  Apparently, they were not actors hired to drink coffee, smoke and handle drills for 2 months; rather, the work was still being set up and the ‘actors’ were in fact installers.  This awkward moment was to be repeated throughout the day’s visit: we’d walk into rooms and there’d be a couple of people hanging from the ceiling, sweating, swearing and telling us that the projector wasn’t working but ‘come back tomorrow’.
The following evening I visited the Art Gallery of New South Wales, where they were hosting artist talks.  I’m a massive proponent of the gallery’s after hours program, which occurs every Wednesday, and features things like artist talks, films and live music.  I dutifully trotted down to the Archibald, Wynne and Sulman prizes and paid to see some of the most underwhelming art I’ve seen in a long time.  The Biennale art at the AGNSW was not that much more engrossing unfortunately.  I headed to Chinatown instead. 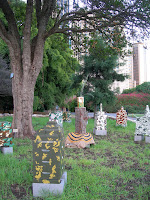 My Friday afternoon involved traipsing thought the Botanical Gardens in search of the elusive Fiona Hall, Janet Lawrence and Choi Jeong Hwa works.  Fiona Hall’s Barbarians at the Gate was similar to the Breeding Ground, exhibited in the Port Arthur Project in 2007.  Hall’s usual themes of trade, colonialism and botany are well-suited to the gardens, yet the actual site chosen within the gardens was a little strange.  Painted army figures hung from the tree above a number of architectural beehives, painted with camouflage patterns. 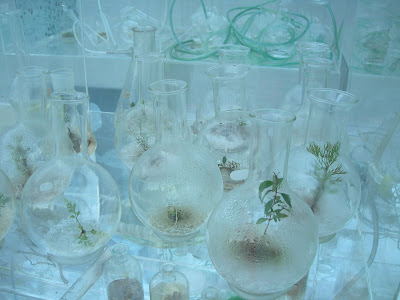 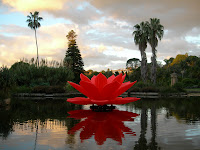 Janet Lawrence’s work was equally as detailed, and while the tent structure that encloses the work initially struck me as quite strange and somewhat detracting, it did give the whole work the feel of a temporary pseudo-scientific experiment.  Choi’s giant inflatable lotus seemed to breathe, inflating and deflating every few minutes.  It was sweet but not all that poignant.  Finding the works in the bot gardens is almost as enjoyable as seeing them, as the Sydney botanical gardens are amazing, with views across the harbour and hundreds of bats hanging like small parcels from the trees. 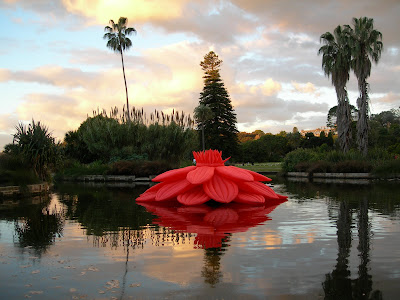 ....and deflated. Choi Jeon Hwa, The Unbearable Lightness of Being 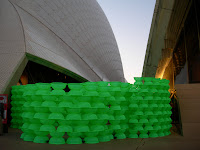 As the sun went down, I made like a merdog to the opera house, where a second work by Choi is nestled between the ‘sails’ of the building (left).  I lingered until Jennifer Wen Ma’s performance New Adventures of Havoc in Heaven III started on the Opera House steps after sunset.  Shadows were projected onto smoke, an elusive substance which preferred to be bossed around by the wind rather than the twirling dancer distributing the smoke below.  To be honest though, I’m not sure that the performance would be as exciting if we could see the projection most of the time.  Those occasional glimpses gave it meaning.
The best of the Biennale was saved until last.  The MCA’s four floors have been turned over to the Biennale director yet again, and they contain a number of excellent works, including a collection of the Chapman brothers’ cardboard sculptures, subtly titled Shitrospective.  Despite their rawness, the figures created out of the seemingly rough and haphazard shaping and painting of recycled cardboard, are surprisingly animated.  You can’t help but feel for the figures in wheelchairs, eyes bulging; and the cardboard miniature version of their The Chapman Family Collection work was very clever (Hint: walk around the plinths, otherwise you’ll miss the person peeing on a dinosaur’s leg).
I’m withholding final judgement on the Biennale before I see the works at the top of Cockatoo Island and Artspace in July.  However, I have a few issues with the exhibition.  While I enjoyed a number of the individual works in the Biennale, I’ve really struggled to see the thematic link between them all.  Secondly, I believe that, like the previous Biennale, the really loaded sites such as Cockatoo Island, the Botanical Gardens and Pier 2/3 are not being used to their full potential, although maybe that’s not unexpected for someone with an interest in site-specific art. 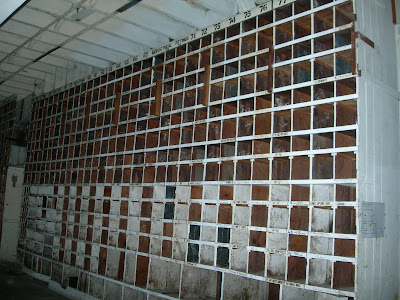 Hopefully "made like a merdog" will soon pass into everyday usage....