Review: Tesselating in the Slips at Visual Bulk

Jonny Rowden and Alexandra Hullah’s energetic performance, Tesselating in the Slips, followed a month-long residency at Visual Bulk.  It’s a testament to their performance that they sustained an engaged audience for nearly two hours on a freezing Hobart evening.  The performance was bookended by participatory damper making, then damper cooking and consumption.  When I arrived, visitors were kneeling in the gallery, mixing ingredients according to laminated instructions.  In a small vestibule, sat the ‘common loaf’ – a lump of dough kneaded by any and all.  Later, the common loaf took on almost religious status when the uncooked mound, shrouded in a tea towel, was taken from its plinth as part of the performance.

The room of the common loaf was lined with documented thought experiments, notes for short performance ideas, and photographic documentation running up to the public performance.  The ideas range from the banal to the utterly absurd. 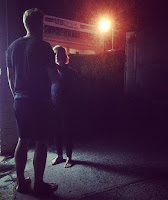 The start of the performance (or at least the first of the short back-to-back performance ‘vignettes’) was down the banal end of the spectrum.  I couldn’t quite hear the chanting, but it was something about energy transference I think.  It was a lengthy and participatory affair that led me to flee into the dark corners of the courtyard lest I be picked as a vessel for energy transfer.  I was reminded of a similar activity at a meditation retreat I attended in the Blue Mountains fourteen years ago (my first and last).

As the performance moved inside it picked up pace, incorporating sound, light and projected images, a costume change, a sandstone block, and eventually the absence of clothing altogether (as previewed on the Facebook event photograph that remarkably dodged the site’s ban on nudity for an entire week).  The relationship between the two artists altered with each vignette.  One moment they’d be hurting each other until the safe word ‘sufficient’ was mentioned, and in another, they’d be diligently oiling and powdering each other’s naked bodies as if applying some kind of protective layer.  While passing the burden of the loaf-like sandstone, they exchanged confessions: “last year I dropped a bottle of whiskey on my hand and it broke my finger”, “I use to pray every night until I was 21”, “I can speak four languages”, “I never liked Disney films because there are too many songs”, “watching Disney films made me want to be an artist”, “I hate making bread” [cue laughs from the audience].  The activities were ritualistic and little a bit Catholic with all the confessions and the breaking of bread.  Unlike most performance art, the seriousness was relieved by small moments of humour. 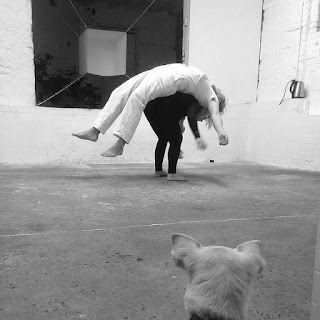 The last vignette, however, was extraordinarily confronting.  Although the context suggested otherwise, the naked wrestling in which Alex was forcibly pinned to the ground looked non-consensual.  Distressed, I ended up exiting the gallery.  I’ve sat through some pretty challenging performances, but Tesselating in the Slips crossed a line at that point.  As one friend later asked, “at what point should the audience intervene?”

Visual Bulk attendees are a diverse bunch who seem to linger at openings (based on my observation and absolutely nothing else), making it a perfect venue for extended performative works like Tesselating in the Slips.  As always, I look forward to the next event.


Tesselating in the Slips was performed on the 17th September at Visual Bulk, Argyle Street, Hobart.

This review was originally published in Warp Magazine, October 2016.
at 5:15 PM