I haven’t blogged for ages. I’ve been deliberating over a number of exhibitions but haven’t actually got round to writing them up properly, so I thought I’d bite the bullet and do a quick one on Callum Morton’s exhibition Wall to Wall at Roslyn Oxley9. Yes, I know it’s not in Hobart, but I was lucky enough to be in Sydney when the exhibition opened and I was blown away by the work. 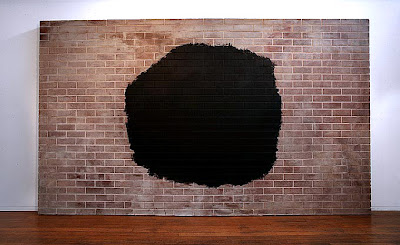 For those unfamiliar with the Roslyn Oxley9 space, I’ll try to describe it because Morton’s work plays with the shape of the gallery. To enter the gallery, you walk up some stairs where at the top you are confronted with Morton’s first work, Monument #22: Black Hole Relocation (2009), a realistic-looking ‘brick wall’ made of “polyurethane, poxy resin, fibreglass, sand cement”, with a messy black circle painted in the centre. You then turn around, and opening off the small hallway/landing is the main gallery space.

Morton’s Monument #23: Slump (2009), also made of imitation bricks, is a sagging wall, which continues the line of the hallway into the main gallery, essentially cutting the space in half. It’s an unnerving sight: a life-size, seemingly heavy besser brick wall, held up merely by wooden supports and sandbags. Of course, it’s all an illusion, as the materials list indicates, but it still makes you slightly concerned as you walk the thin corridor between the white gallery wall and looming ‘besser bricks’, carefully stepping over the questionably adequate supports. 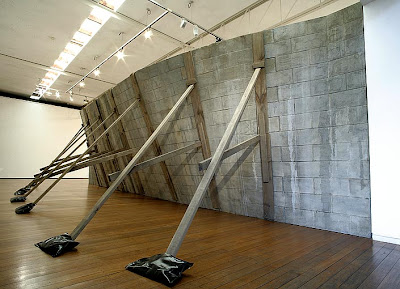 Morton’s wall falls short of the gallery length and the viewer is able to step around to the other side, the safer, cleaner side, and guessing from the painted surface, the outside. Here, the illusion continues. Painted in a trompe l'oeil style, we see that the geometric shapes are accompanied by shadows that, if you stand in the middle of the wall, emphases the illusion of a buckling wall. If you stand closer to the edge however, the shadows stop making so much sense. It’s disconcerting enough not to want to linger on this side of the wall, even though it’s plainly supposed to be the less ‘dangerous’ alternative. 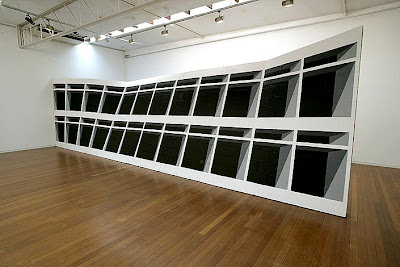 I have something to admit. I love things that pretend to be other things. I remember the day that I discovered that the ‘metal’ (or chrome paint) on my mobile was peeling off. Was I upset? Not at all, I thought it was terrific. In 1860, Gottfried Semper described plastic’s predecessor, Indian Rubber, as ‘the factotum of the industry [which] lends itself to all purposes… since its nearly unlimited sphere of application is imitation,” and that was almost a century and a half ago. I like to think my mobile, camera, car and ipod, all of which sport a classy ‘metal’ finish, would please Semper.

I’m quite lucky in the visual arts to have so many examples of such illusionism to embrace. On my recent overseas trip I saw trompe l'oeils in the churches of Italy and France, and visited a Fischili and Weiss survey at the TATE Modern, where an entire room was made out of polystyrene objects so carefully shaped and painted that I at first walked through the room without realising they were imitative. Ricky Swallow also practices a similar kind of artmaking - the ‘hand-made ready-made’ as Justin Paton has described it. In short, you can probably understand the basis of my slightly biased enthusiasm for Morton’s plastic ‘bricks’. (Note: these last two paragraphs of rambling have been added after I was trying to work out why I used the words ‘blown away’ to describe an exhibition, and why I couldn’t come up with a more appropriate alternative)

An aspect of this exhibition that really interests me is that Roslyn Oxley9 is a commercial gallery and that Monument #23 work is priced at $120,000. I understand that private collectors are not the only clients of such galleries, and that public galleries frequently purchase work, but really, how is such a work to be handled, where would it be stored, and in the case of a private collector, where would it be placed? (“We’ll place it next to the dining table so that the guests don’t linger…”) I know this is not a new concept, I mean, installations are pretty much standard even in commercial galleries but I often wonder how viable such exhibitions are. Are they subsidised by other shows? Do many installations sell? If so, to whom? If anyone out there works for a commercial gallery, has an answer to these questions, or has ever wondered the same thing, please feel free to leave a comment.

The copyright for all images belongs to Roslyn Oxley9 Gallery.
at 3:55 PM