Aniwaniwa: Brett Graham and Rachael Rakena, 10 Days on the Island 2009

Accompanied by my New Zealand flatmate, today I went and viewed Aniwaniwa, a video installation at the historic Rosny Barn, by New Zealand artists Brett Graham and Rachael Rakena. The work, which is part of Tasmania’s biannual arts festival, Ten Days on the Island, is an engrossing depiction of the flooding of the village Horahora, as part of a hydroelectric scheme.

The viewer is encouraged to lie on mattresses beneath the five round convex screens mounted within massive tyre-like forms that are suspended from the ceiling. Speakers are positioned behind the provided pillows, and once lying down, the viewer feels appropriately submersed in the sound. The vibrations of the Maori singing, turbines and other accompanying sounds lull me into a relaxing, almost trance-like state. 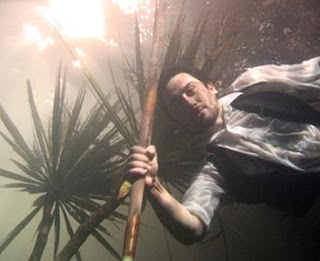 The videos appear almost narrative. I enter the space at a time when bubbles (which I had at first mistakenly identified as stars) are floating tranquilly across the screens, and this scene becomes ‘the beginning’ for me. Then the turbines start up, the grainy black and white image alluding to past times. The shape of the turbine whisking the bubbles into a fury of circular motion echoes the unusually shaped screen. The noise of the turbines, which, I should add, look eerily like eyes, is deafening (although when I left I realised that I’d stupidly positioned myself right behind the largest speakers). 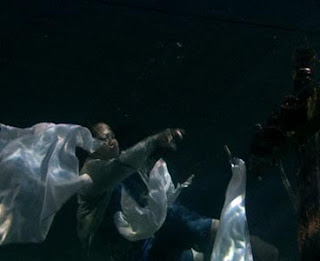 Not quite in synch, one by one the screens switch to underwater scenes of waving reeds and submersed figures going about oddly everyday activities. To the sound of a spiritual wailing, a woman floats in a murky haze, hair lazily waving above her head as she tries to light a fire, a man with a spade digs amongst the reeds, and a boy and a girl, dressed neatly in shirts and carrying brown suitcases stare placidly at the viewer. The blurred image, the eerily calm figures, and soundtrack suggest memory or myth, and while the overall effect is quite tranquil, there is an underlying feeling of sadness and loss. 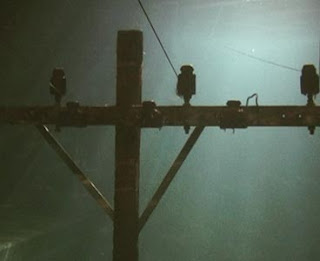 The underwater powerlines that come into view at ‘the end’ are the only built indicator of the town, Horahora, that was drowned and turned into Lake Karapiro. My flatmate, who grew up in a town on the North Island not far from the Lake, remembers waterskiing on Karapiro during school camps, and the way that she described the location reminded me strongly of Lake Jindabyne, the popular watersport playground that covers the similarly submerged old village. A new Jindabyne has sprung up on the shores of the dam created in the 1960s as part of the Snowy Mountains Scheme, yet it’s eyesore that in no way resembles the old drowned town (Apparently, when the dam levels are low you can spot the old church spire sticking defiantly out of the water). Similar comparisons can be made to Tasmania’s hydro electric scheme which has resulted in numerous artificial lakes being built throughout the island, so Aniwaniwa seems an appropriate work for a Tasmanian arts festival. 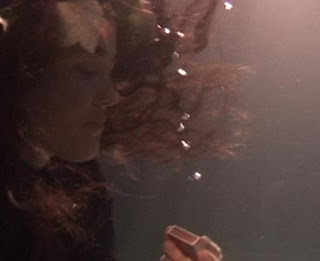 I unfortunately missed out on the forum on Friday at the Tasmanian School of Art, where the artists spoke about their work, although I usually prefer to look at a work before I hear about it anyway. The gallery guide at the Barn door didn’t seem to understand my preference however, and insisted on giving me a long spiel on the work before I’d even had a chance to enter.

Overall, Aniwaniwa is a stunning work. I stayed for two loops (of I think about 15 minutes each), engrossed the entire time, making it one of the few video/sound works that has managed to beat my very limited concentration capacity (others include a Bill Viola piece at the AGNSW last year and the sound piece at the Sydney Biennale. by Janet Cardiff and George Bures Miller).

These images have been sourced from http://www.aniwaniwa.org/. Copyright belongs to the artists.
at 3:53 PM