I’ve been itching to write on a Hobart exhibition again, but the galleries seem to be recovering from they annual Christmas shows and have either shut up shop (CAST, Entrepot) or have an uninspiring spread.  Fortunately, this Friday (8th) the second annual music/sound/art festival MONA FOMA begins.

The inaugural festival was, to be honest, the best festival that I’ve ever attended, and got a few embarrassingly gushing posts as well as an Artlink review from me (which was criticised as being too positive – what does that say about professional review writing?)

With the exception of the final night’s concert with the Dirty Three, John Cale and Bridezilla and a small event at the Theatre Royal, all the events at this year’s MONA FOMA are free.  The festival is obviously well funded for this to occur, and the 2010 festival’s apparently co-funded by David Walsh (who’s currently building his Museum of Old and New Art), the Salamanca Art Centre, and the Tasmanian state government.  This post is starting to sound a bit like a PR schpiel, however the reason why I don’t hesitate to point out the funding bodies is because MONA FOMA is so equitable.  Other Tassie festivals, such as 10 Days on the Island might have great line ups of international artists, actors and musicians, however I can only ever afford to attend one or two events at most unless I wrangle myself a reviewing job (in which case I can’t truly relax and enjoy the performance because I’m too busy making value judgments).

One of the must attend events for me is John Cale’s Dyddiau Du/Dark Days.  The work was exhibited at last year’s Venice Biennale in the Wales Pavilion but despite my frenzied attempt to see all the exhibitions in Venice in less than a week, this particular work was missed.  Thank you fate.

The other must-see work is in the Bond Store of the Tasmanian Museum and Art Gallery, one of my favourite exhibition spaces in Hobart due to the fact that its walls are dank and covered in historical convict graffiti, the stairs are precariously steep and made of roughly hewn wood, the floors are uneven and the entire building is held up by massive solid wood columns and beams.  The combined exhibition and performance is called 48 Fugues for Frank, and is described in the programme as “a musical homage to the life and work of Frank Zappa”: 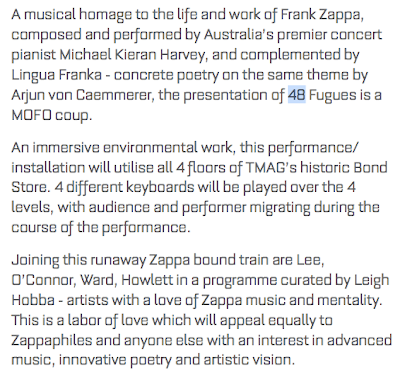 Of course, I’ve also had a long love affair with the sounds of the Dirty Three, so I’m eagerly awaiting the closing concert.

I’ll try and post a few reviews on my MONA FOMA experiences over the next couple of weeks.  Happy times.

Hi Lucy-Shamefully I haven't been to a single event...
To be honest though, I had some initial reservations last year when I found out that the State Gov had tipped a few hundred thou into the event.
It was also scheduled to run at the same time as the Cygnet Folk festival. You could argue that the two festivakls were & are quite different, true, but festival goers are not so easily pigeon holed & I know of people who engage with both.
However, the CFF has been going for over twenty years & only recieves Gov funding in the tens of thousands & MONA reportedly got in the vicinity of 200+ in its very first year.
All that aside I'm a HUGE fan of Brian Ritchie in particular, having attended his very first Melb gigs with the Femmes way back. Also Mr Walsh is to be applauded for his broad vision & the chutzpah to get the thing happening.

Steve, you're not too late. It ends tomorrow with a beer and cheese matching. Tonight's concert should be fantastic too. However, it's one of the two paid gigs. You have an excuse though - I'd imagine that the festival would be one of your busiest weeks of the year?

I'm totally with you on the Cygnet Folk Festival. I've missed the festival the last two years due to MONA FOMA, and I think it's a real shame that the two are scheduled at the same time as my music interests span both festivals. I'm a visual artist and attend lots of experimental music gigs, but I also play the fiddle and love folk music.

I think the funding discrepancy mainly comes from the fact that the govt is trying to keep up with the money Walsh is throwing at the visual arts and music scene. It's a good strategy to match or contribute to initiatives that are mostly privately funded as a form of 'encouragement'.

I spoke to a number of visiting artists who were performing at this year's MONA FOMA and they were all v. impressed, particularly as it was happening in Hobart (although not in a derogatory sense). It's a great thing for the city, and it's good that the govt. recognises that.

Hi David,
I am MOFOing it up with enthusiasm this year.

Detached in particular is an excellent exhibition. If you're in Hobart, tune into ABC local radio at 7.30am tomorrow morning (19th) because I'll be mentioning that, along with some other of my fave events.