Melbourne is alive with Mimesis 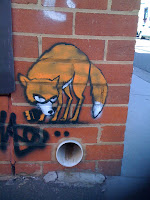 I headed to Melbourne last weekend for a day and a half of coffee, beer, Chinese duck (please please someone open a decent Chinese duck-selling restaurant in Hobart), and most importantly Art Galleries.  Unfortunately it wasn’t a great season for ARIs, as many of them shut up shop over January, however I saw the both the International and Australian NGVs (National Gallery of Victoria), and a substantial amount of street art.

The two big ticket items in Melbourne currently are Ricky Swallow’s The Bricoleur, and Ron Mueck’s (self titled?) exhibition at the Ian Potter Centre: NGV Australia, and the NGV International respectively.  You’d have to be blind to miss the similarities between the two artists’ work.  Both are masters in creating the ‘wow factor’, they play with illusion, make self-contained sculptures, and take mimesis to the most extreme level of anal-retentiveness.  They’re also often criticised as being popularist for these reasons.  In both exhibitions, viewers can be seen clustering around the often plinth-dependent works, saying things like ‘wow, it looks so real’, ‘this would take so long’, ‘did he do all this by hand?’, or ‘this is so cool, man’ (guess the demographic of that last comment…). 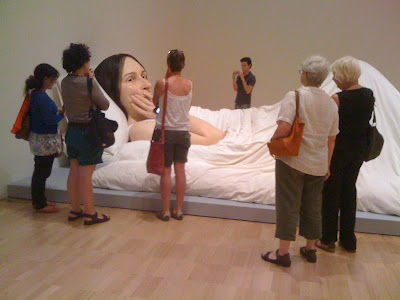 Ron Mueck at the NGV
They’re right.  The work is ‘cool’, and part of the works’ attraction is imagining the painstaking labour that goes into handcrafting these objects.  Critics do not necessarily see this ‘wow factor’ as a positive thing, however.  For instance, I remember reading a particularly savage Art Monthly Australia article written by Adam Geczy a few years ago called ‘Neo-medievalism’ (2005) where he argues that Swallow’s carved sculptures are ‘a petit-bourgeois art’ and a ‘lapse into a retrograde medievalism’ and concludes that the popularity of Swallow’s artwork is simply the fault of ‘nostalgia’.  Even Sebastian Smee’s more favourable review in The Australian (16 Dec 2006), warns that ‘Swallow’s dedication to the craft of woodcarving is self-conscious, even self-congratulatory.’
While not all of Swallow’s work is carved from wood (he’s now moved on to the equally as traditional bronze casting), the majority of the works in the show are carved from wood, and many of them I’d seen before.  There was the life-sized table covered in sea creatures, called Killing Time, which I overhead a gallery tour guide boasting to an awed crowd: ‘…and it was carved from a single piece of wood’ [I thought it was two, but no matter].  On the adjacent wall hung the other very familiar sculptural still life: Salad Days.
I’d not seen The Bricoleur (2006) before, which depicts a single Converse sneaker wedged in a tree branch, carved from a single piece of Jelutong.  Unfortunately, I couldn’t get past the frustrating futility of carving a block of wood to look like a tree branch (‘self-congratulatory’ indeed).
Once you get past the wow factor, however, Swallow’s works are really very clever.  The title Killing Time, for instance refers to his experiences fishing, the notion of the still life, as well as the labour invested in creating the piece; and so the labour and the craft is not just incidental, but rather it contributes to the overall meaning of the work.
My favourite pieces were not actually the ones that Swallow had handcarved at all, but rather the bronze casts of decaying cardboard, which were akin to minimalist paintings along one wall.  As a group, the works were called Bowmen’s Record, and individually These Days Aren’t Different Enough, numbers 1-4.  Like his carved wood objects, the works still utilised a traditional sculptural medium – cast bronze – and yet this time Swallow had no hand in their production [no pun intended].  I’m still undecided as to whether it would make much of a difference if the artist handcast these works himself.
If anything, I actually enjoyed Ron Mueck’s work a bit more.  While Mueck’s works had the same annoyingly distracting ‘wow factor’, they really revelled in the theatricality, whereas the spotlighting and similarly sparse set up of Swallow’s exhibition just seemed a little tacky.
For those not in the know, Mueck has a background in designing creatures for movies and television (most notably the cult Labyrinth) and so perhaps it’s not surprising that there is an element of theatricality in his works.  What interested me at the NGV was the lack of any set or context surrounding his stubbornly independent photorealistic sculptures.  With the exception of three works (one of which was hung on a blue painted wall), most were presented on plinths set away from the high white walls, and I’m guessing the aim was to create a ‘neutral’ background.  This attempt to erase all context made the strange human figures with their distorted scales (a massive new born baby, a tiny Dead Dad or Sleeping Old Woman in Bed), seem even more surreal. 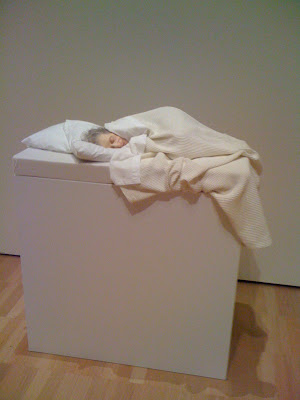 Sleeping Old Woman in Bed
Before I end this massive post, I also want to quickly mention the Clemenger Contemporary Art Award on now at the NGV Australia (outside the Swallow show), as I actually preferred this free exhibition to both the (expensive) Swallow and Mueck shows.  The exhibition includes fantastic works by Julie Gogh, a bizarre car and trailer set by Domenico de Clario, a painting/installation by Guan Wei, a disconcerting multi-media/sculptural work by Destiny Deacon, and a mysterious Janet Lawrence work amongst others.
Lastly, I just want to acknowledge the lack of published reviews on MONA FOMA despite my excited promises in my last post.  I did write an extensive review, but then realised the significant conflicts of interest made it unpublishable:
a) At least one of the artists will probably be marking my PhD (hard to avoid in Tassie), and
b) I volunteered at MONA FOMA.
I should note that I really really enjoyed MONA FOMA however, even if I didn’t follow up with published reviews.  I didn’t sleep for 3 weeks!
at 10:32 PM

Hi Lucy, nice post. I can understand the popularity of the works of particularly Mueck & I guess they bring in the crowds who traditionally dont venture into galleries. A similar situation occured when the Piccinini exibition toured here last year & numbers swelled.
A good thing? I reckon, but it illistrates yet again the obvious gaping divide between appealing to popular culture v's the more cerebral.
Perhaps this is why we only ever hear about the Big Box exibitions as there is only so much room left over for art in our busy lives so they have to be bombastic & over the top, competeing for our attention amongst the clutter?
I miss late night BBQ duck as well-my favourite is The Supper Inn in Celestial Ave off Little Burke St.