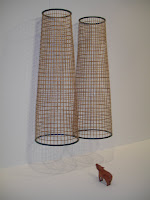 I finally made it up to the Asia-Pacific Triennial in Brisbane.  It was my second Triennial, and I wouldn’t have made the effort ($400 flights return from Hobart just for a weekend) if I hadn’t enjoyed the previous Triennial in 2006-07 so much.  Granted, my 2006 visit immediately followed the most banal and disappointing Sydney Biennale of all time, but it wasn’t just the comparison that made the APT so great. 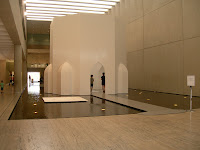 This year’s APT was not quite as engaging as the previous one, but it was still an excellent exhibition.  I was excited to see that the water mall in the Queensland Art Gallery (yes, a massive pond in a building that requires strict climate and humidity controls) held another site-specific artwork by Ayaz Jokhio, and consisted of a six-meter tall octagonal room in the middle of the water, with a ‘bridge’ which allowed viewers to enter the work.  Described as ‘conceptual architecture’ on the curator’s podcast (which you could easily transfer onto your iPod or iPhone using the gallery’s wireless network), the work referenced Islam and traditional Eastern design and architectural form.  The structure sat easily in the space, and like the other site-specific works produced previously for this space, the pond acted both as an inspiration as well as a ‘frame’ around the contemplative work. 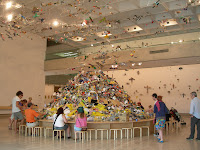 Also in the older Queensland Art Gallery was a massive pile of recycled materials - fabric, plastic bottles, egg cartons, paper, paddle pop sticks and thread – and an open invitation to build aeroplanes that would then be hung from the gallery ceiling.  The project was called In Flight, and was by artists Alfredo and Isabel Aquilizan who moved to Australia from the Philippines in 2006.  Judging from the hundreds already suspended above me, I felt a wee bit intimidated, yet I pulled up a kid’s size stool and got to work.  The result was a bit wonky; yet, it was great to make something, channel all that creative energy in me, after viewing two galleries filled with inspirational art. my rather wonky contribution
Most of the APT is held in the newer Gallery of Modern Art (GOMA) which is only a few hundred meters from the Queensland Art Gallery.  Unfortunately, in the three years since my last visit the coffee shop below the state library that separates the two galleries has turned into a coffee-molesting, self-serve kids-fest so it made the walk between the two galleries quite a bit quicker (I managed to find a good coffee in the not-so-nearby Barracks complex off Petrie terrace, however).  The cavernous spaces of GOMA were utilised by Wit Pimkanchanapong with his descriptively titled Cloud, made up of pieces of paper strung to long cords with paperclips.  The cords were strung across the length of the entrance hallway above the heads of visitors as they walked into the building.  It was an effective, albeit underwhelming work. 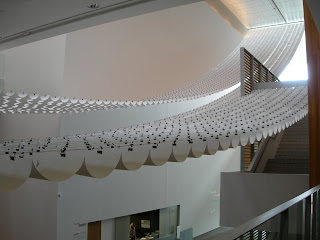 Cloud - as viewed from the 2nd floor 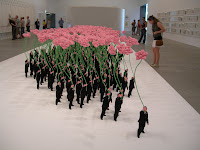 This year’s promotional artwork – Zhu Weibing and Ji Wenyu’s People Holding Flowers - was surprisingly small (in fact I was amazed at how familiar the image of the work was – the APT certainly advertises well).  From the various magazine and billboard advertisements, I thought the tiny, besuited, pink-faced men holding similarly coloured lotus leaves were life-size, yet they didn’t reach my knee.  In a way, it was kind of disappointing. 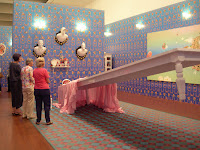 One of my favourite works (and apparently amongst my friends I’m alone in this affection) was the kitsch work by Indian artists: Jiten Thukral and Sumir Tagra.  They had mocked up a gaudy living room with pigeon wallpaper, mirrors, photographs, and a tipping table.  I wasn’t really convinced by the table and thought it detracted from the carefully staged scene, yet I enjoyed the atmosphere of the installation and the meticulous details. 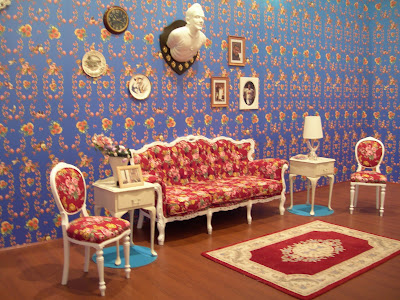 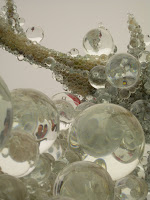 Opposite was another ‘poster child’ of the APT – Kohei Nawa’s PixCell-Elk#2 (2009).  The taxidermied stag looked like it had a bejewelled version of the poor Tasmanian Devils’ facial tumour disease.  Various sized glass balls were glued to the stuffed animal, the balls magnifying, distorting and mirroring each other, the viewers, and the stag underneath.  The work’s aura was no doubt assisted by its location in a glowing white cube, but it was an overwhelming and enjoyable work, and one that was very popular with fellow visitors.
Another favourite was one of Tracey Moffatt’s videos.  I’ve seen other videos in this series (I think at the previous Sydney Biennale?) and they never fail to entertain me.  This particular video was called OTHER and explored themes of ‘other-ness’ and the exotic in popular culture through short clips of popular movies.  As works that critique social prejudices and assumptions, I believe they’re very successful because of the combination of humour, references to popular culture and distanced commentary.
A surprise inclusion was the revolutionary art, or chosunhua, from North Korea.  I quite enjoyed it, although a friend of mine was mildly furious about the appropriateness of having such ‘uncritical’ art in a contemporary art exhibition.  While much of the art in this year’s APT was conceptually rigorous, I don’t know if I could single out the work from North Korea as being the most shallow or lacking in criticality (I’m thinking that award goes to the one-liner works by Rudi Mantofani).  From a social and cultural point of view, I thought it was a nice comparison to the work from China - a country that not long ago churned out similar revolutionary art. 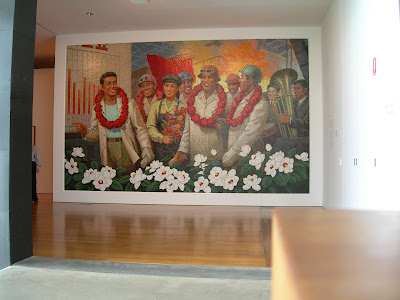 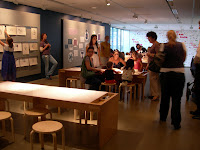 The education and children’s programs associated with the APT are really amazing.  I didn’t have the excuse of an accompanying child, but like in the previous APT this mere detail didn’t stop me from sitting down at the low tables in the ‘kid’s APT’ area and making a thaumatrope – participating artist Runa Islam’s kid’s APT project.  The podcast mentioned earlier, was an informal and illuminating discussion between the exhibition’s organisers and a nice addition to the unusually well written didactic wall texts.  Unfortunately, I missed the APT films that were screening over the weekend of my visit.  Regardless, I still spent my two days in Brisbane totally absorbed by the APT.
The 6th Asia-Pacific Triennial runs from the 5th December 2009 – 5th April 2010 at the Queensland Art Gallery and the Gallery of Modern Art, Brisbane.
at 11:48 PM