So much for my Mike Parr review. I've been away for the last month, and never got around to writing it. I've also got this bad habit of turning up at Detached on a Wednesday or a Thursday - the two days the gallery is closed - so I haven't actually seen the Detached part of the Mike Parr show as yet. It's a bit peculiar having a gallery closed on a Wed/Thursday as usually galleries take Mon/Tuesday off. As my gallery visiting day is usually a Thursday, and I'm a creature of habit, I keep turning up on the days it's closed. No extra points for intelligence there. I’ll get onto Mike Parr as soon as I get my brain together.

I thought I'd just mention the two great arts events that greeted me on my return to Hobart - Installed Taste and Mona Foma. Installed Taste was a combined 6a/Inflight (two Hobart-based ARIs) initiative set up at the Taste of Tasmania. For those not in the know, the Taste is a major recurring food/alcohol/entertainment event held over the New Year period, and is promoted as a major tourist event. It runs for a week and showcases the best of Tassie produce (yes, I know that’s debatable) –wine, beer, fruit, seafood, air guitar…. 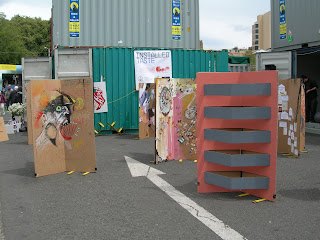 Anyhoo, so Installed Taste involved of a number of different artists/groups, who would set up work in two large shipping containers on a rotating basis - anywhere between 4 hours and a day. I arrived back in Hobart from interstate on the second last day so I only saw a couple of the sessions. On the Friday, I saw some of Jamin’s previously exhibited paintings of Tasmanian politicians and major players (such as ex-Premier Paul Lennon, who is currently under investigation by police, and his mate Mr Gay, head of Gunns). It was an amusing choice of work for such a touristy event, as each of the paintings was accompanied by critical commentary by the artist, subtly hinting at the rampant corruption in Tassie politics. While this particular body of work by Jamin has never done anything really for me, I appreciated the fact that they were shown at one of Tassie’s premier tourist drawcards. 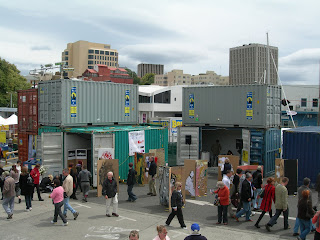 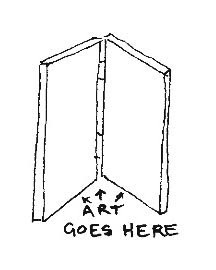 The first GG was held in 2007 to coincide with Tasmanian Living Artists week and involved only 12 artists, although one artist destroyed his cardboard in a performance on the day. It was displayed in Mawson’s Place sans permission and attracted a fairly curious crowd. The next GG involved another 12 Tassie artists, and then it travelled to Newcastle acquiring another 20, then Melbourne where another 10 or so artworks were added. There are plans to invite more artists to make work for the next Guerrilla Gallery to be shown during Ten Days on the Island. I can’t critically comment on the Guerrilla Gallery due to my personal involvement (yes, this was a major plug), but the website is http://10percentpending.blogspot.com/ if you want more info.

Mona Foma is a music/sound/art event, underwritten by mega-tas-art-supporter David Walsh and curated by Brian Ritchie (of the Violent Femmes). On Friday night I attended Scott Cotterel’s exhibition, The Fall, at Kelly’s Garden, and the concert which took over Salamanca place, showcasing musicians such as Pinky Beecroft, the Italian underground group The Zen Circus, Eugene Chandbourne, Dean Stevenson, Fiona Burnett and Balletlab. I’m ashamed to say that I was distracted by the lush lawns and flowing beer for most of the concert so I can’t really critically comment, although I must say that the Zen Circus was fantastic, particularly in relation to their collaboration with manga artist Davide Toffolo.

Feeling deeply sorry for myself the next day, I dragged my hungover and protesting body down to St David’s Church to catch Ansgar Wallenhorst’s improvised organ performance (nothing like a Church to make you regret your ‘sins’ of the night before). The first piece was in fact not an improvisation but a performance of Franz Liszt’s Fantasy and Fuge on the Chorale, which while unexpected, provided a great introduction to his own work which followed. The improvisation was based on four contrasting works in the MONA (David Walsh’s Museum of Old and New Art due to open in 2010) collection – Christoph’s Untitled (Le Grand Macabre) (2007), Sydney Nolan’s Centaur and Angel (1952), Mummy Mask made in Ancient Egypt in 1-200CE and Balint Zsako’s Untitled (2007). I was lucky enough to have scored a programme on the way in, having turned up earlier than most of the (apparently unexpected) large crowd. Tiny photocopied black + white images of the works Wallenhorst was using as inspiration, and I really wish that the works could have been somehow displayed in the Church for us to see in person. I understand that there was probably a reason for this –security perhaps, or maybe Wallenhorst thought it might have been distracting – but as MONA won’t be open for at least another year, the public won’t be able to view these works until then, which I think is a great shame. The performance successfully combined the visual arts with music, which was Ritchie’s curatorial premise, and was an amazingly powerful performance. The piece responded to the dark painting by Ruckhäberle, twinkled at Nolan’s mythical creatures, marched through the Egyptian mask and elaborated on Zsako’s patterned ink work.

I’m not Christian, but there is something very powerful about Churches, particularly when combined with such an intense music performance. The organ, which has the ability to make incredibly dense and complicated sounds, belting out pew-grumbling low notes, or softly ringing high melodies, combines well with large open spaces such as St Davids’. During the performance, I considered the sense of wonder and awe felt while listening to the organ in that overwhelmingly decorated architecture, not surprised that people felt the presence of a God in Churches.

One of the amazing things about Mona Foma was its accessibility. All the events, apart from Nick Cave’s concert, were free, which was extraordinarily generous. I know that there’s a reason why festivals such as Ten Days on the Island have fees, but often the fees are so high that I can’t afford to attend the performances that I’d sorely like to go to. Hopefully, with the unexpectedly large crowds, Mona Foma will be a recurring festival, as the premise behind the event was great; plus there isn’t really a festival that solely focuses on sound in Tasmania so it has its own little niche down here.

I’m aiming to head to the Mona Foma sound art exhibition at Salamanca Art Centre's Long Gallery sometime in the next week, so I may end up writing a bit about that in the next post if I haven’t got round to Mike Parr. Also, I’m still counting the male/female artists shown in Hobart Galleries, but I haven’t posted any results because I’m still trying to track down a couple of the exhibitions. Will post asap however.
at 12:19 PM

Found your blog while looking at Mona Foma search results from google. I'm one of the organisers.

Enjoyed reading the review, we are so glad people made it to the cathedral, was amazing.

We had planned 6 plasma screens to be installed to show the works - and also live footage of the performance, but the church stopped us 3 days before, which is why we struggled to get the booklets right. It appears people enjoyed it anyway - which is great.

Thanks for your comments Leigh. It's nice to understand why the works weren't shown.

I'm sorry that it wasn't a very critical review, more of a ramble really!

Oh and thanks for organising Mona Foma. I really really enjoyed it.