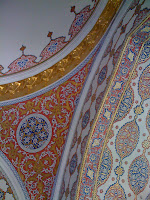 I’ve just returned from a 3 week conference/ art research trip to Turkey, a country of ancient ruins, enthusiastic touts, lots of eggplant and meat, amazing fresh fruit and vegies, and a very cool city: Istanbul.  I travelled around with two other girls in a hire car for two weeks before hiring an apartment in Istanbul for a week near the ever-awake Taksim Square.  The conference I attended (and presented at) on the last five days was the International Conference on the Inclusive Museum, which was a topical end to my visit as I was quite unhappy with the (lack of) educational and money-grabbing approach of most of Turkey’s museums (more on that in a future post) 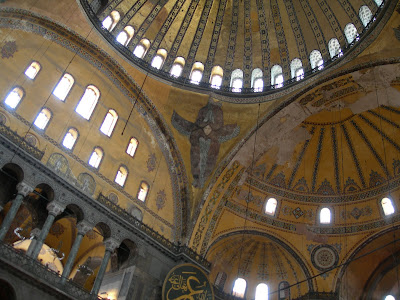 The curious Seraphim figure with an 'uncovered' face, Aya Sofya, Istanbul
From my extensive prior research and experience, the contemporary art (in a Western Art sense) in Turkey seems confined to Istanbul, and to a lesser extent, Ankara.  It appeared strange to me coming from a country such as Australia, where every town above, approximately 3000 people, seems to have a contemporary art gallery (of varying quality and criticality, mind you).
Ankara’s Cer Modern was our first contemporary art gallery stop after two weeks of ancient ruins, traditional arts and crafts, Ottoman architecture and grimy interiors.  I was shocked at the relief and the ‘I’m home’ familiar feeling I experienced when entering the building, which could easily be an art institution anywhere in the world.  I truly understood what O’Doherty meant by his description of the modern ‘white cube’ art gallery:

A gallery is constructed along laws as rigorous as those for building a medieval church.  The outside world must not come in, so windows are usually sealed off.  Walls are painted white.  The ceiling becomes the source of light.  The wooden floor is polished so that you click along clinically, or carpeted so that you pad soundlessly, resting the feet while the eyes have at the wall.  The art is free, as the saying used to go, “to take on its own life.”(Inside the White Cube: The ideology of the Gallery Space, p.15) 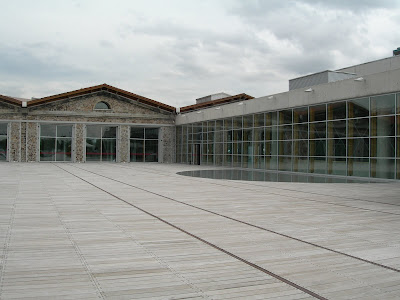 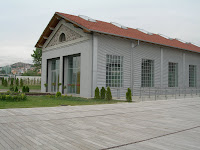 True, the gallery was showcasing the art of a Turkish art collector, the majority of it by Turkish artists, but it still could have been a travelling show anywhere in the world.  The gallery shop displayed the ubiquitous acrylic laser-cut ‘birds on a wire’ brooches and branded pencils, the floors were polished concrete, the bathrooms sported the latest shiny European taps, and the building embraced the popular museum ‘rust fetish’ aesthetic by showing the old train tracks beneath an acrylic section of the floor, revealing the structure’s previous use as a train shed.  Perhaps the most ‘Turkish’ part of the gallery was its café.  I ordered a hamburger, and it came deliciously spiced like the kofta (meatballs) we’d eaten for the previous two weeks. 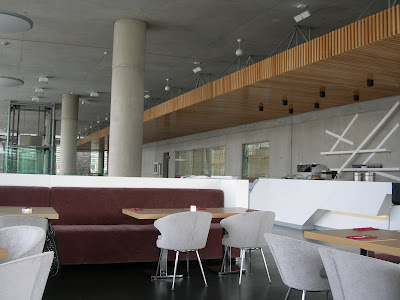 Gallery Cafe, Cer Modern
The exhibition in the Cer Modern was interesting, even if painting dominated the exhibition  (there was only one new media work and only a handful of sculptures and photographs).  The premise of +Infinity: A selection from the Ebru Özdemir Collection, was, as the title suggests, a particular art collector’s collection.  However, the short blurb on the exhibition went a bit further and suggests that we can ‘read the history of art’ through the collections of people like Ebru Özdemir.  I thought the blurb, which you can read here, was interesting because in many art schools, the art market is often ignored or underplayed when teaching art history and/or theory, despite its significant role in shaping, or to a lesser extent (in my opinion), reflecting art history.
There were a lot of fairly banal works, but the ones that grabbed my attention were the surreal landscapes by painter Alaettin Aksoy, the tracing paper collage by Elvan Alpay, and the humorous Please Clear the Dance Floor by Gözde Iklin, which seemingly depicted the wedding from hell mixed in with some Devil Facial Tumour-esque forms.  I also enjoyed Inci Eviner’s Leg Animal, where the artist had created a half-man half-squirrel type creature by dripping paint on unstretched canvas, a figure that appealed particularly as one of our many car games - ‘hypotheticals’ - involved a similar proposal: ‘would you rather have a squirrel for a foot, or a shark for a hand?’  The digital photographs by Kezban Arca Batibeki, collectively titled the Burnt Palaces Series (2006), depicted ruined interiors, ironically framed in ornate gilt frames.  At the same time, the value adding effect of the frames was somewhat undermined by the ‘sameness’ of the frames – all of them the same size and dimensions – and the cluster-style hanging.
The show was an interesting introduction to a wide range of Modern and contemporary Turkish artists, some of which I recognised in our later visit to the Istanbul Modern.  As this post is blowing out, I’ll write about the galleries of Istanbul in my next post.
The Cer Modern can be found at Altinsoy Caddesi No.3, Sihhiye, Ankara. +Infinity: A selection from the Ebru Özdemir Collection  is on from the 2 April to the 5 July 2010
at 4:29 PM