My last post described the rather generic experience of the Cer Modern in Ankara, Turkey.  Following Ankara, I spent a week in Istanbul, a vastly different city to the rest of the country. I was hard pressed to find contemporary art galleries in the other Turkish cities I visited on the trip: Iznik (famous historical ceramic centre), Bursa (car broke down), Bergama (the living city next to the ancient city of Pergamom), Cesme (Genovese Castle), Ephesus (ancient city), Pemukkale (ancient city and unlikely travertine landscape, pictured left), Olympos (ancient city, more Genovese ruins, and the Chimnea), and Göreme (historic monastery carved into the bizarre rock formations, the town of Goreme pictured below).  However, in Istanbul it was hard to avoid contemporary art. 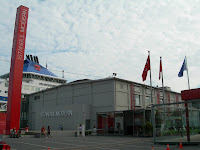 My friends and I dutifully headed off to the Istanbul Modern on our first day in the city.  Like many contemporary art galleries, it’s housed in an ex-industrial building; in this case, an old shipping warehouse.  They’ve retained part of the industrial aesthetic (which I affectionately term ‘rust fetish’), while fitting out the gallery with the obligatory white walls. 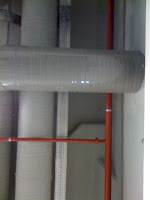 I revisited the gallery when it hosted the Inclusive Museum Conference dinner a couple of nights later.  Someone from the conference asked me what the gallery was like earlier in the day, to which I replied “oh it’s a generic white cube gallery with a bit of rust fetish thrown in, but it’s got an emphasis on Turkish art which is great for international visitors”.  Interestingly, on the guided conference tour before the dinner, the director proudly told us that the Istanbul Modern is “not your usual white cube gallery,” referring to the fact that it’s in an ex-industrial building and it wasn’t in the shape of a cube.  She’d taken the notion of the ‘white cube’ very literally.  It was a strange moment, simply because I’d confidently described the gallery as such only a few hours earlier.  Rust fetish has become institutionalised; it’s the new ‘white cube’.
I took a couple of images of the library installation, which was pretty impressive: books suspended from the ceiling on the lower level, with a seamless transition from outside the glassed in library area to the inside.  The reading was of varying quality: 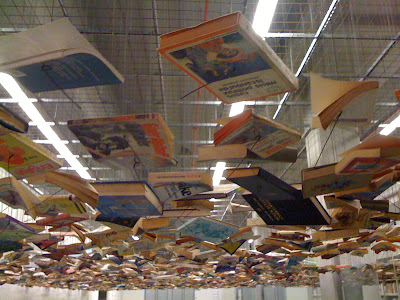 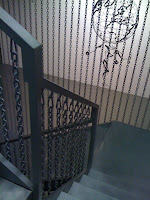 The staircase was also pretty memorable.  At first, I thought it was an artwork: bullet strewn glass walls, heavy chain casing, galvanised iron steps… it didn’t really encourage you to walk downstairs. 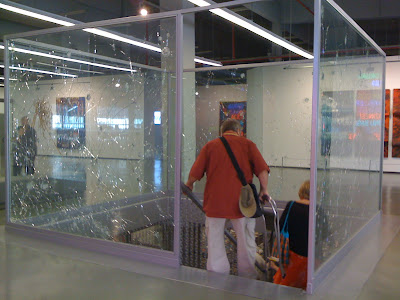 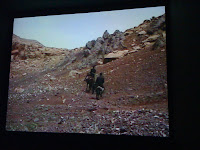 The work that stood out for me at the gallery was Sener Ozmen and Erkan Ozgen’s video Tate Modern Yolu (Road to Tate Modern), 2003.  It’s an ironic and very amusing reference to Don Quixote’s novel of Cervantes, with the two besuited artists, one on a horse and one ridiculously perched upon a small tireless donkey, setting off from the mountains of Diyarbakir to the Tate Modern, London.  I watched a couple of loops of the video on my first visit, which is a rarity for me with video. 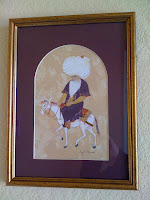 The next day I came across a co-op art workshop, where practitioners were trying to maintain traditional Turkish arts and crafts, such as ceramics, marbling and miniature painting.  They had for sale a couple of handpainted copies of an historical painting of a man with an oversized turban sitting on a relatively fragile looking donkey (pictured left), and I bought it, simply because it reminded me of the video.  On my return visit to the Istanbul Modern, I was no less impressed with the video, with its over-the-top dialogue and mock seriousness. 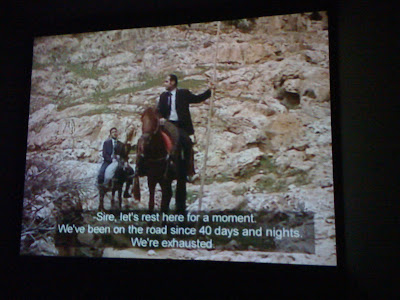 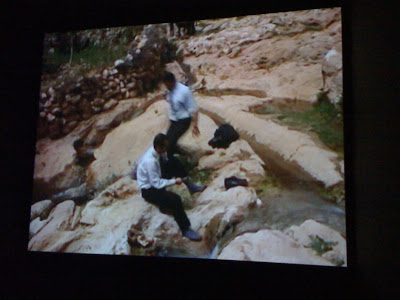 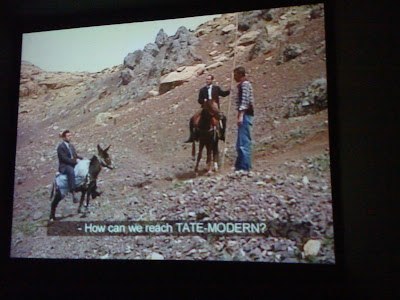 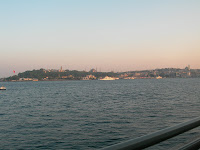 I should point out that I returned to the Istanbul Modern a third time, but not for the art, it was for the food.  The conference dinner wasn’t that impressive, but the gallery restaurant's position on the waterfront, with a balcony looking over the Bosphorus to the Topkapi Palace and Eastern Shore, was the main reason why we opted to return on our last night.  At the conference dinner, there was a bloody cruise boat blocking the view (bringing back memories of my one and only visit to Quay, in Sydney), but on this last visit, not only was there an undisturbed view (left), but the food was really very good and relatively reasonable for the level service. 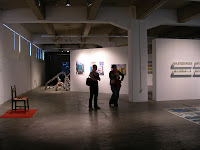 Near the Istanbul Modern (but stupidly not signposted) was a warehouse full of a number of art exhibitions initiated as part of the city’s 2010 European Capital of Culture status.  It was the first time that the warehouse had been used for this purpose. Upstairs were a number of smaller exhibitions, all of which worth seeing, although I really only remember a couple of works clearly.  Downstairs was a topical exhibition about money, with a humorous work which invited concerned viewers to press the 'magic button', which would supposedly 'cure' the financial crisis. 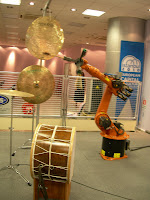 We also stumbled across an interesting work in the Taksim square train station.  Two anthropomorphic orange machines with drumsticks attached to their hands were playing percussion instruments, dictated by monitors in the Bosphorus.  Not speaking Turkish, I wasn’t sure if it was measuring the pollution or waves, but it was an engaging work and exhibition location.  We’d actually gatecrashed the opening night, and I was interested to see that Turkish art openings (if this was representative) don’t serve alcohol (maybe not surprising in a predominantly Muslim nation).
I left Istanbul happy that at least one Turkish city had fulfilled my enjoyment of serendipitous exhibition encounters.
at 10:44 AM

There are few artist run galleries and smaller initiatives around karakoy and beyoglu. It'd be great if you also saw those and wrote your reflections. Might have given a better idea about the art scene compared to these big initiatives.

Thanks for your comment, evren. I tried to find some of the artist run initiatives around Istanbul, but it was really hard. I did quite a lot of research before I left and wrote down what I though were addresses of smaller galleries, but I couldn't find them. The tourist office wasn't much help, but then most tourist offices around the world don't know about ARIs. I think I really needed a local artist to show me around.