Future Pass and Cracked Culture at the Venice Biennale

In this post I want to discuss the exhibitions Future Pass: From Asia to the World and Cracked Culture? The Quest for Identity in Contemporary Chinese Art, both satellite exhibitions to the Venice Biennale.  However, the emphasis is going to be more on Future Pass – I’ve just included a brief comment on Cracked Culture because I found the links between the two quite interesting.  Both exhibitions distinguish their curatorial strategy as being from an Asian or Chinese, respectively, point of view.  However, while the catalogue and didactic texts (of Cracked Culture, in particular), implied that this ‘different perspective’ would present quite a different exhibition to shows imagined by ‘investors and curators in the west’ (Cracked Culture catalogue), both Future Pass and Cracked Culture showcased the same familiar artists, styles, and iconography that I see in, say, Australia’s Asia Pacific Triennials.

The thing that surprised me the most about Future Pass was the proliferation of cute.  If I’d read the short catalogue beforehand, I no doubt would have been more surprised. The curatorial statement is incredibly serious, which seems at odds to a lot of the seemingly depthless artwork on display.  The exhibition is spread over two locations: Palazzo Mangilli-Valmarana in Cannaregio, and Abbazia di San Gregorio in Dorsoduro, and each location has a number of dichotomous themes.  The Palazzo hosts the ‘Virtual/Real’, and ‘Cosplay’ [is Cosplay dichotomous in itself?], and the Abbazia focuses on ‘East/West’, ‘Past/Future’, ‘Yin/Yang’, ‘Universe/Self’.  Because I hadn’t read the catalogue beforehand (which is normal for me), I didn’t realise that the curators had based the exhibition on such sober concepts, and even after flicking through the large number of photos I took during my visit, I still can’t quite resolve the relationship between the artworks and the above mentioned philosophical notions.

Future Pass seemed overly painting heavy.  The sculptures tended to be shiny, finished, and acrylic.  Most works were self-contained, which was a departure from so many of the Biennale exhibitions that appear to favour installation or performance, ie. more immersive works of art.  The emphasis on figuration was also noticeable, mostly human figures or cute robotic shapes, anime-like figures, cartoons (including a few Disney character pastiches – something that I think was exhausted a long time ago).


Sometimes it’s good to make the viewer work a little, but there was little ambiguity in most of these works.  I felt spoon-fed.

The works that I found the most interesting were those that had some relationship to their surroundings, something that happened more in the Palazzo than the Abbazia.  Without reading the catalogue, I was a little unsure whether the heads of the frescos slightly visible above the Mapi Gill paintings were deliberate.  I’m still not 100% sure, but I hope it was. Shy Gong’s Baby Angel was obviously deliberately placed against the ornate wall decorations.  It probably would’ve looked better with a more creative plinth or other presentation, but I enjoyed the relationship between the site and ‘angel’. 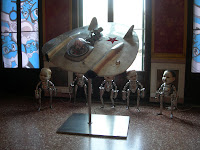 The rest of the works didn’t have enough of a dialogue with the palazzo to warrant the curators' strong reference to the ‘white cube’ in the catalogue.  They declare that the ‘contemporary artworks interact with, and sometimes almost seamlessly blend into, the historic buildings in which they are installed’.  Yet it seemed that most of the works sat in these buildings despite their historicism; they were plonked, not placed in any meaningful relationship to the space.  I found myself reflecting on the New Zealand Pavilion exhibition I saw in the same Palazzo at the 2009 Biennale: Francis Upritchard’s beautifully fragile figures.  They weren’t site-specific, but they sat in the space harmoniously, the elaborate surroundings subtly influencing the reading of the works.  Unlike most of the Future Pass works, Upritchard's figures worked with, not against, their surroundings.  It’s no doubt tricky to show works of art in such semiotically loaded spaces as the Palazzo, and I’ve noticed so far that almost no artworks at the Biennale attempt site-specificity (a wasted opportunity in my opinion), but when it’s stated in the catalogue that there is a deliberate ‘interaction’, it’s even more disappointing when the promise is not carried through.

I sought out Cracked Culture in the back streets of Dorsoduro, because I have a particular interest in Mainland Chinese art, having studied in China.  I was disappointed in the works, and I found it difficult to swallow the strong statement of difference mentioned at the beginning of this post.  The work with water spewing out of a McDonald’s arch into a blow-up paddle pool, for instance, was about as predictable as the Mickey Mouse pastiches in Future Pass. 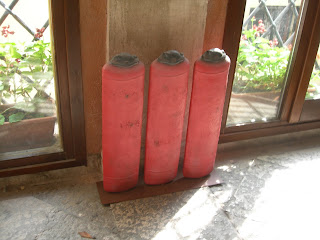 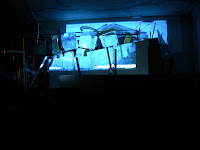 However, there were a few works that I really enjoyed in Cracked Culture, such as the video projected on a pile of the university’s chairs (the exhibition was spread over two university art campuses), and the flattened fire hydrants sitting in the stairwell, although I found the absence of labels for these two works odd (the opposite problem to Future Pass’s invasive labelling habit).  I was also amused at the ‘exhibition continues’ arrows that lead to a seemingly empty classroom.  Were the confused visitors looking around the room part of an obscure performance artwork?

Overall, Future Pass and Cracked Culture showcase an absurd number of artworks between them (Future Pass, for instance, had 106 artists participate).  Yet at the end of the day (literally.  It takes almost a day to cover all four locations), I felt like I could probably count the number of artworks I vaguely enjoyed on both hands.  Maybe I don’t get it, maybe you need to be ‘into’ cute to appreciate the Future Pass works, but basically, I found it difficult to swallow the hyperbole.  I wish the exhibitions had lived up to their promise.