We’re three weeks into the iterations.  Iteration: Again is a four week public art project in Hobart initiated by curator David Cross, which involves seven local curators who have between them commissioned thirteen art projects around Tasmania.  As the title suggests, the art projects have four ‘iterations,’ with most projects evolving each week.

I’m not going to review the project here, because I’m writing a piece for another publication, but I thought I’d outline a couple of the projects that are worth checking out during this last and final week.  They’re also the artworks that I think engage most with the public, as opposed to the people who are 'in the know', that is, the local art scene.  Most (in my opinion) are not worth the effort, although Iteration: Again will make a nice coffee table book afterwards, no doubt. 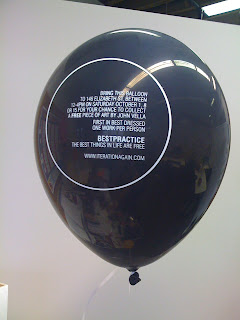 On the first day of the project, I trotted along to Vella’s Salamanca Market stall and after a small standoff I left with a helium balloon, which I traded two weeks later for a small section of Vella’s fantastic Clarendon House artwork, or at least a section of the column that was site-specifically installed at the historic house on Tasmania’s midlands in 2009.  Circular sections have been ritually cut from Vella's past artworks over the four weeks, and participants are invited to select a circular piece in exchange for a marked balloon, or alternatively they can bid for them.  A survey show with a twist. 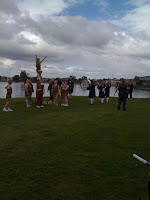 Who doesn’t want to live on their own private island on the Derwent River, and be sent off to a marching band and cheerleaders? I’ve had non-art Hobart locals send me questions on Twitter about the amusing project, which is situated in Hobart’s northern suburbs. 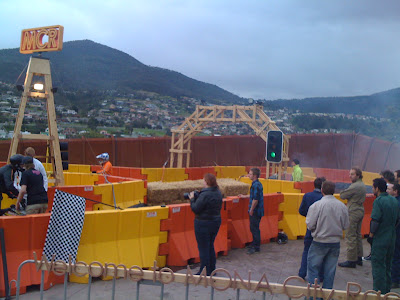 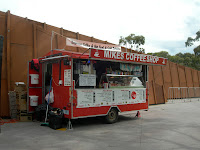 MCR, or the MONA Motocross Raceway, is a bit cringeworthy, but it's fun and worth seeing.  I had the crazy experience of riding one of the tiny bikes yesterday and walked away in more pieces than the bike.  Dagwood Dogs for effect. 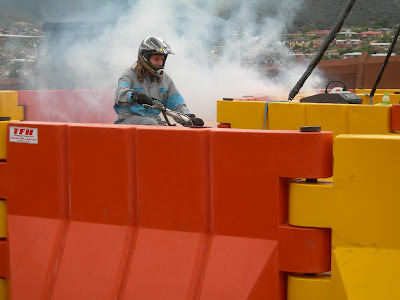 Iteration: Again runs from the 18th September to the 15th October. The calendar of events can be found here.  The ability to decode the calendar is a whole other kettle of fish.

[Update: the online version of my full published review in Realtime can be found here]
at 5:47 PM

hey lucy
i really enjoyed your review of iteration again for realtime. would like to have a chat sometime!
cheers
Lucas Ihlein

Thanks Lucas. Are you based in Hobart?

nope, in sydney. http://lucazoid.com/bilateral
but i'll be in hobart next week. i'm working with laura hindmarsh, do you know her?

Yeah, I'm friends with Laura. How interesting. I guess I'll probably meet you in the near future.