I started forming this list in a previous post this year following a visit to a number of galleries in Rome, which all showcased innovative architecture while retaining novel elements of the site's original function, such as slaughterhouse or factory.  I noted that the identity of many new museums is very much connected to this new style of architecture, yet the declarations of ‘innovation’, ‘difference’ and in some cases ‘challenging the notion of the white cube’, are ironically very similar.  While I wrote the original post in May, the ideas had been brewing for quite some time, particularly the notion of rust fetish in architecture.  Since I wrote the post, I’ve collected a number of images to illustrate my point, and rather than add them to the old post, I thought it’d be preferable to dedicate a whole post to the features of new museum architecture.

Before I start on the new museum architecture, I’d like to highlight the epitome of the old/traditional museum architecture – the neo-classical sandstone building.  This could be the National Gallery in London, the Modern Art museum in Rome, or the Art Gallery of New South Wales in Sydney.  The latter is a classic sandstone portico entranceway similar to that of a Greek temple, is flanked by bronze statues of horses and their riders, and surrounded by the greenery of the city’s domain and botanic gardens. Before the viewer even steps inside the gallery therefore, the very exterior of the gallery has suggested notions of reverence and devotion.  I’ve examined the semiotics of the AGNSW for my PhD and could bang on about it for pages, but I’ll save you and move on to the contemporary stuff. I just want to emphasise the fact that art institutions have always conveyed messages through their architecture; the new museum style may look different but the intentions are not all that dissimilar. While the newer white-walled galleries appear relatively neutral and unobtrusive in comparison to the distinct and heavy aesthetics of the older galleries and exterior, this neutrality is merely a façade, an illusion. 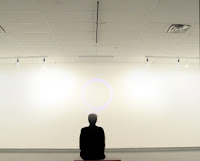 I’ve been to more than one lecture or specialised tour led by Museum staff, where they’ve stressed that “we’re not the usual white cube gallery”.  One such gallery was the Istanbul Modern.  Their reasoning? The gallery, which has prime views over the Bosphorus, used to be a shipping warehouse. They’d retained the exposed pipes on the ceiling, emphasising their presence by painting them red. Yet, their walls were white, the painting areas neatly partitioned off, and the video works were tucked away in what might be called a ‘black cube’. The gallery used the same strategies of neutralising the space as most contemporary art galleries. What I found most interesting was the anxiety about being labelled a ‘white cube’ space, and perhaps the misconceptions about the term.  I think it also explains the popularity of industrial to art centre conversions, where original features are retained.  By retaining original pipes, machinery, railway tracks, roughly hewn wood pillars, scarred walls, they distance themselves from the most literal interpretation of ‘the white cube’, and the ideology explained in Brian O’Doherty’s influential text.  But maybe industrial nostalgia is the new ‘white cube’?  The art world has a rust fetish.

Here are some of the features of the new museum:

1. Angles. Not right angles, other angles.

3. The walls are mostly white, even if they’re self-aware of the white.  Sometimes they’ll have a few coloured walls just to show that they’re slightly subversive.

5. Sexy concrete: polished for the floor; brutally raw or curved for the walls/exterior.


6. At least one ridiculously large room, which will often accommodate small objects.  You will look up at the skylights or beams on the roof (oh, so far, far away) like you would in a church.  The room will make you feel insignificant and humble. Art is god.


7. They have toilets with weird sinks. You may or may not get them to function. (I wish I'd taken a photo of the Macro sinks, but I feel a bit uncomfortable taking photos in bathrooms)


8. The building has an industrial past, popular past functions include slaughterhouses, factories, power stations or shipping warehouses:

9. Exposed plumbing or other functional parts of the gallery (also to show awareness of the white cube shiz)


10. Rust fetish.  If the rust was not already part of the building prior to its current function as a gallery, ‘new’ rust is manufactured.  Rust fetish not only refers to literal rust, but also aged features in general - old machinery, crumbling bricks, old graffiti...

10. Site-specific art that responds to unusual or novel aspects of the architecture.

12. A funky gift shop, expensive restaurant, and similarly overpriced café.  It will have all three.

Would the same rules work for winery architecture?

Hi Lucy,
I just wanted to say that I have been reading your blog for a little while, and really enjoy all of your reviews.
I am a student in History/Art History and am looking into curatorship or arts writing in the future. I am currently studying in Melbourne, however, I am from Hobart originally.
I have been unable to find your email address, but I was wondering if it would be possible to ask you a few questions about your path (to art greatness!)?
Thanks for your informative and engaging blog.
Miriam

Hi Mim, I'm not sure about 'art greatness', but if you want to contact me, my uni email is my first and last names separated by a full stop @utas.edu.au

I'm glad you enjoy the blog.

Just wanted to say that you write so well! Also I feel lucky that I know you and when I read your writing I hear your voice in my head. Kinda like reading the Catcher in the Rye with a New York accent. Well see you soon I am sure! Keep up the good work!!